It was during the late 1800's and early 1900's that many immigrants from Greece came to the Bakersfield area.  The railroad was the main attraction for many of these individuals and families, because then, as today, railroad activity was a large part of the Bakersfield economy.  Other settlers engaged in farming and other businesses that supported the railroad and the railroad workers.   Included in this was the operator of the first silent movie theater in Bakersfield.   Others operated fresh fruit stands, confectionary stands, restaurants, shoe shine stands, and barber shops.   Some were popcorn and/or peanut vendors who operate their stands "on wheels" on many of hte street corners in downtown and east Bakersfield.

As the numbers of these early settlers increased, they felt the need, like other ethnic groups at the time, to organize themselves to promote the general welfare of their people, their Faith, and their heritage. It appears the first formal attempt at organization occured in 1916 as documented by this article.  This organization was called "Uplift Society Socrates.  While this organization was charged to help these immigrants and their families maintain their Faith and heritage, it was also tasked with helping them assimilate into the land of opportunity called America.  This included helping them learn English, fostering "Americanism" to the youth, and preparing them to become naturalized American citizens.   The upholding of American ideals was a common practice among the early Greeks.

As the group grew, they began the process of looking for property to help provide a focal point for their community.  They accomplished this in 1924 by the purchase of a piece of property at 401 Truxtun, where they build a small hall that served as place for both religious and social gatherings.  That same year, the name of the community was formally changed to, "The Hellenic American Community of Bakersfield".   In 1925, a baptismal font was purchased and donated to the Church by Mr. Bill Christy.  This font continues to be used in our Church today.  During this decade, in 1929, the Order of AHEPA of Bakersfield was established.

After this time the community continued to grow, from less than 100 families to over 200 families by the early 1930's.  It was at this time that the community decided that they needed a seperate Church.   They built a small Church behind their hall in 1932, with Father Luis Skidatari officiating at the laying of the cornerstone. 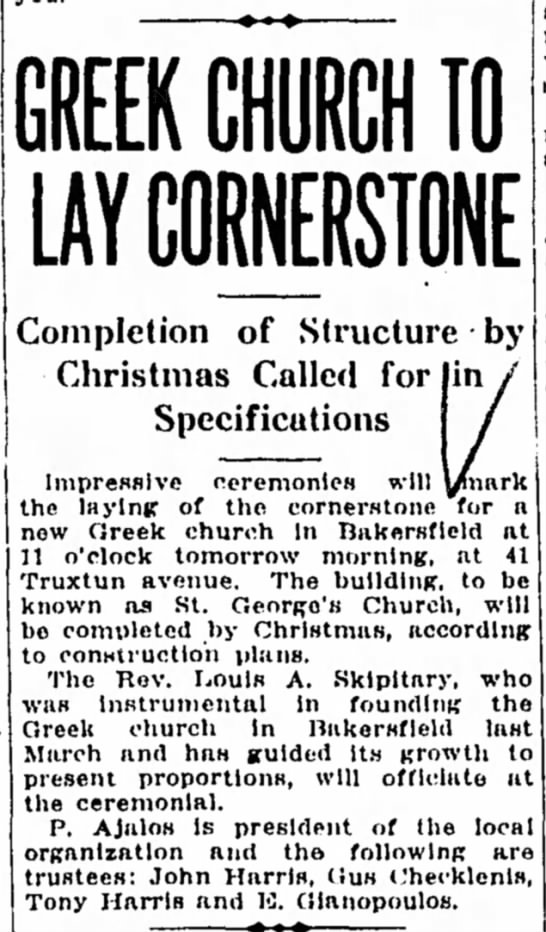 On April 23, 1932, the name of the community was changed to, "The Hellenic Community of St. George Greek Orthodox Church".  Fifty-one signatures were required to make this change.   In 1936, the first Sunday School and Greek Schools were established with Irene Carnakis serving as the teacher.

Up until this time and through 1944 the community did not have a permanent priest.  This changed in 1944 with the appointment of Father Vasilios Markopoulos as the first permanent priest.  Later that year, the first choir was established under the leadership of Irene Carnakis with Petsie Mellas Balasis serving as the organist. 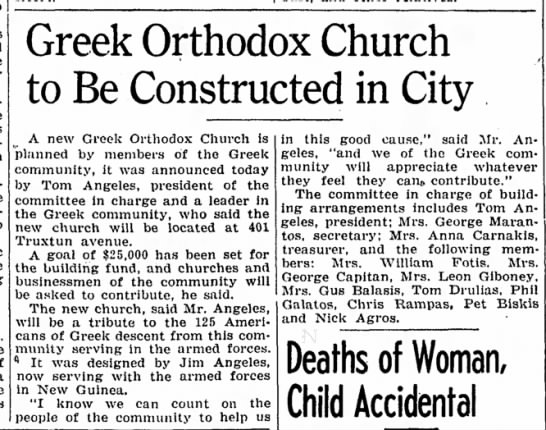 The initial church design was done by Jim Angeles who, in 1944, was serving with Armed Forces in New Guinea: 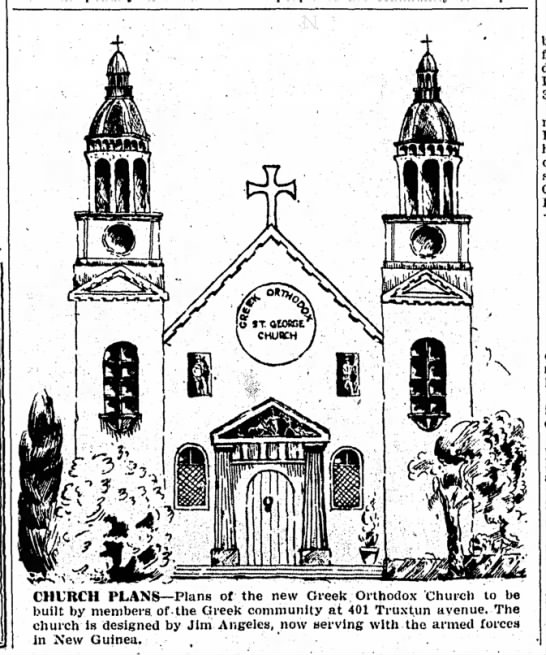 The earthquake of 1952 devastated many parts of downtown Bakersfield.  Unfortunately, our community was not spared.  The newly built Church suffered some damage to the bell towers and the hall located next to the Church (which was built in 1924) suffered extensive damage as well and was condemned by the city.   It remained standing for a few years afterward as the basement area of that building was still able to be used.   Eventually, the building was demolished.

In 1956, His Grace Bishop Demetrios of the Fourth Diocese of Los Angeles officiated at the consecration of our Church.  He was assisted by Rev. Naom Nitsiotis of San Bernardino and our assigned priest, Father John Bersentes.   Mr. Pete Apostolos served as the Godfather of the Church.   Mr. Apostolos was the individual who donated the land now known as Hellenic Park (the site of our Greek Food Festival) to the community.

In 1966, the foundation was laid for our present hall, with Father Andrew Daregas officiating.

In 1974, the 50th anniversary of the community was celebrated and the first Greek Food Festival was held.

An educational building was constructed in the back of Hellenic Park in 1981.

Since the beginning of the new millenium, a number of new additions and have been made.  This included (chronologically):