" I am the living bread which came down from heaven; if any one eats of this bread he will live forever; an the bread which I shall give for the life of the world is my flesh"

"Take, eat: this is my body, which is broken for you: this do in remembrance of me"

Prosphoro is the altar bread which is leavened and prepared with pure wheat flour to be used for the Eucharist. It is round and stamped on the top with a special seal (sphragis or Panagiari).  It is made in two layers (which are connected) symbolizing the two natures of Christ (Human and Divine) and the Church Triumphant (Heaven) and the Church Militant (we here on Earth).  The inscribed parts of the top are used for the Eucharist, and the rest of it is cut into small pieces to be distributed - either to be consumed by the priest and the family who baked the Prosphoro(Kataklasto) or distributed to the faithful (antidoron).  It is offered immediately after one partakes of communion and should be the first piece of food that touches our mouths after the Sacrament.  Often the prosphoro makers give the bread in dedication or remembrance of an event or activity, such as family health, the anniversary of a loved one’s death, or a celebration of a birth or Church event.  This form should be included with your Prosphoro offering.  The method of making prosphoro is an ancient one, and is done with prayer and dedication. 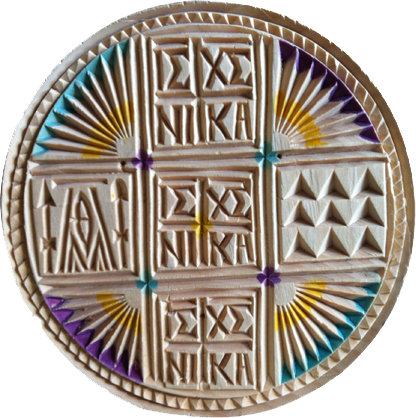 The left section of the seal (large triangle) represents the Virgin Mary.

The right section featuring the nine small triangles commemorate the angels, prophets, apostles and saints of the church.

During a service prior to the liturgy, the priest breaks the bread and the seal and prays for those represented by the seal: the Theotokos, the prophets, angels, etc. The priest also prays for all the living and the dead who have been submitted to him.

Baking with a Prayer

Preparing the prosphoro for Divine Liturgy is the ancient and meaningful Orthodox Church tradition. It is a great privilege and requires a blessing from the priest.

By reflecting on the bread's use, the baking of it becomes a prayerful and solemn undertaking. Needless to say, before one begins the baking process, prayers are in order. After the bread has been baked, the prayer may be said by the family.   During the baking of the bread there should also be present in the kitchen an icon and lit candle or votive lamp.